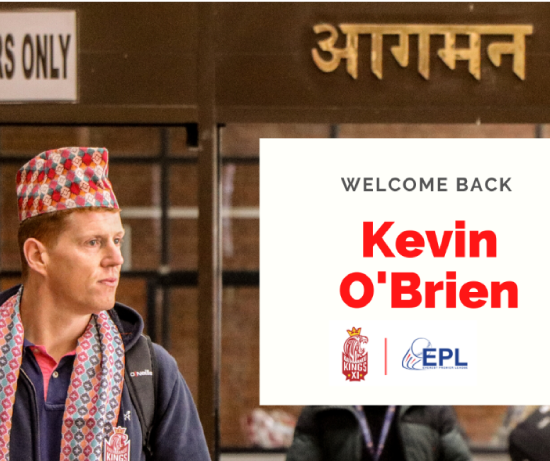 Kathmandu Kings XI (KKXI) welcomes the Ireland’s World Cup Hero Kevin O’Brien as 1st international player for this year’s EPL 2020. Kevin O’Brien is now familiar name to Nepali cricket after he was featured in the Everest Premier League playing for Kathmandu Kings XI in 2018.  O’Brien was the leading bowler with 9 wickets in his 7 matches and was among the league’s highest run scorer that year.

Kevin O’Brien has been an integral member of the Irish Cricket team since 2006 and has represented Ireland in 3 of 50 over ICC World Cups and in 5 ICC T20 World Cups. O’Brien has played lot of domestic one day and T20 cricket around the world for some of the biggest domestic teams.

“Kevin O’Brien is world class player and his leadership qualities on and off the field makes him integral part of the team. Kevin is super excited to come back play for Kathmandu Kings XI” mentioned Raj Jung Thapa CEO of Kathmandu Kings XI.

The first centurion for Ireland in Test cricket or the knock in the 2011 World Cup against England which is the world cup fastest century. Kevin O’Brien has been a record breaking player of Cricketing world. The record setting all-rounder will be playing for Kathmandu Kings XI which is the biggest franchise in EPL acquired by Tele Holdings Pvt. Ltd. as a legacy of Team Colors X-Factors from EPL.